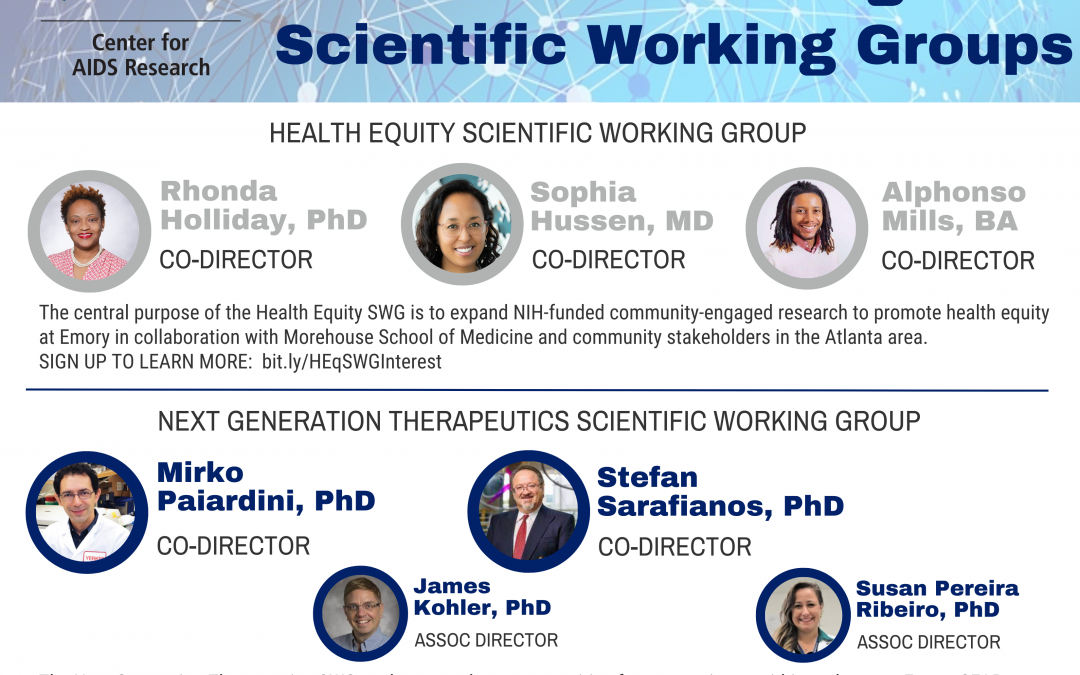 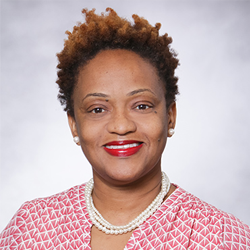 Rhonda Conerly Holliday, PhD, MA
Co‐Director, Health Equity SWG
Dr. Holliday (Rhonda) is an Associate Professor of Community Health and Preventive Medicine at the Morehouse School of Medicine. She is a public health researcher with a background in developmental psychology. Rhonda has extensive expertise in Community Based Participatory Research (CPBR), health equity, and health communications. Her topical areas of interest include HIV prevention among adolescents and emerging adults, including college students and justice-involved individuals. She is the PI for the core research project for the Morehouse School of Medicine Prevention Research Center (U48DP006411), focusing on implementing a CBPR approach to HIV prevention on the campuses of HBCUs and Minority Serving Institutions. Importantly for this SWG, she has published not only on the results of her CBPR projects, but also on the methods and lessons learned in developing and executing community-academic partnerships.

Sophia Hussen, MD, MPH
Co‐Director, Health Equity SWG
Dr. Hussen (Sophia) is an Associate Professor of Global Health in the Rollins School of Public Health at Emory University with a joint appointment in the Division of Infectious Diseases in the Emory University School of Medicine. Sophia is an infectious diseases physician and public health scientist who conducts research related to improving HIV and mental health outcomes for youth living with HIV, with a particular focus on young Black gay and bisexual men. She has recently completed a CDC-funded pilot trial of a CBPR-developed intervention to enhance social capital among young Black gay and bisexual men living with HIV, and she is also incorporating participatory methodologies into ongoing NIH-funded intervention development grants (R34MH124638; R34 MH116805) and exploratory mixed methods work (R21MH121164). Sophia also leads community engagement efforts within the Emory Clinical Trials Unit (CTU) and the Atlanta site of the MACS/WIHS CCS. 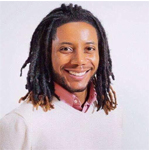 Alphonso Mills, BA
Co‐Director, Health Equity SWG
Mr. Mills (Alphonso) is a community health worker at Positive Impact Health Centers (PIHC), a large Atlanta community-based organization focusing on infectious diseases care, mental health care, substance use treatment, and other support services for people living with and at risk for HIV. Alphonso, who is openly living with HIV, has developed a strong track record of both professional and personal advocacy in the local Atlanta community. He is a 2020 graduate of Morehouse College, where he majored in psychology. He has also served on a Community Advisory Board for several of Dr. Hussen’s research projects since 2017. Due to the sum of his professional, research-related, and personal experiences over the last five years, Alphonso has extensive community connections with key organizations and individuals working in the HIV field in Atlanta. He also has experience with CBPR and other research as a participant, research assistant, and advisor.

The Next Generation Therapeutics Scientific Working Group (SWG) seeks to catalyze opportunities for team science within and across Emory CFAR institutions to set the foundation for future exploration and development of (i) novel approaches for viral suppression in people living with HIV using combinations of therapeutics that overcome drug resistance associated with current ART and are delivered as formulations designed to facilitate their long-term release; and (ii) immune-based strategies, focusing on those FDA-approved for other diseases, aimed at targeting and limiting HIV residual disease and HIV reservoirs. Activities will include hosting research proposal feedback sessions, educational, networking events, and/or career development sessions as opportunities for CFAR Members, CDC staff, and Georgia Tech and Morehouse School of Medicine faculty to interact; provide structured mentoring for Early-Stage Investigators in the field to ensure a robust scientific future; and promote multi-investigator applications to the CFAR Developmental Core and ultimately to the NIH. 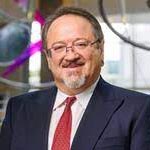 Stefan G. Sarafianos, PhD
Co‐Director, Next Generation Therapeutics SWG
Dr. Sarafianos (Stefan) is the Nahmias-Schinazi Chair, Professor, and Associate Director of the Laboratory of Biochemical Pharmacology (LOBP) Division in the Department of Pediatrics at Emory. He studies viral replication at the molecular level, its inhibition, drug resistance, and the development of drugs that will treat human disease by novel mechanisms of action. Stefan has worked in retroviral structural biology, biochemistry, and virology since 1993 and has published more than 170 manuscripts. In early biochemical work he identified the HIV reverse transcriptase (RT) active site residues that are involved in dNTP, DNA, and PPi binding prior to any crystallographic information. His lab has had extensive contributions in the development of potent inhibitors that act by novel mechanisms of action including EFdA (islatravir), currently in Phase III clinical trials (for which he was recently awarded an NIH MERIT award) and in characterizing their mechanisms of inhibition and resistance. Stefan has worked in the HIV capsid field for several years now, and his lab was the first to solve the elusive crystal structure of the native (uncrosslinked) hexameric HIV capsid protein (CA) in apo form and in complex with CA-targeting antiviral PF74 (Science, 2015). This set of structures provided the framework for studies in which 45 crystal structures of the native CA hexamer were solved with mutations that affect capsid stability, and in complexes with host factor peptides and CA-targeting antivirals. Extensive biophysical and virological characterization revealed compounds with proprietary compounds that improved potency, resistance profiles, and metabolic stability compared to PF74. Some compounds can inhibit clinically-relevant PF74- and GS-6207-resistant HIV-1 strains. 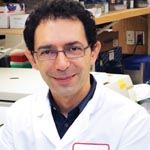 Mirko Paiardini, PhD
Co-Director, Next Generation Therapeutics SWG
Dr. Paiardini (Mirko) is an Associate Professor of Pathology and Laboratory Medicine at Emory and a Researcher at Yerkes National Primate Research Center and the Emory Vaccine Center. For almost 20 years, Mirko has been involved in studies of AIDS pathogenesis in both HIV-infected individuals and in the models of SIV infection in rhesus macaques (RMs). Mirko gained extensive experience with in vivo studies of SIV infection of RMs in which virus replication is suppressed by a potent ART regimen, thus validating this model for studies of HIV cure. He led several studies in which in vivo immune interventions have been conducted in ART-suppressed SIV-infected RMs, aimed at reducing, and possibly eliminating, immune dysfunctions and HIV persistence in people living with HIV, including treatment with IL-21, IL-15 agonist, fingolimod, as well as blockade of PD-1, CTLA-4, and IL-10. More recently, his laboratory developed the NHP model of SARS-CoV-2 infection to test the therapeutic potential of baricitinib. He directs several NIH-funded studies of HIV immunology, pathogenesis, and persistence. He is the principal investigator of ERASE (Enterprise for Research and Advocacy to Stop and Eradicate) HIV, which is an NIH-funded international collaboratory aimed at developing therapeutic interventions to cure HIV infection. 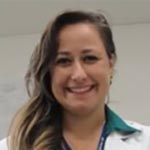 Susan Pereira Ribeiro, PhD
Associate Director, Next Generation Therapeutics SWG
Dr. Ribeiro (Susan) is an Assistant Professor of Translational Medicine in the Department of Pathology at Emory University. She is an immunologist with experience in multi-omics approaches and with expertise in the development of cellular and immune assays and sophisticated flow cytometry models. Susan has focused in pathogenesis, progression and responses to immune therapy in order to discriminate mechanisms that leads to different outcomes in different individuals (Ex. Responders and Non-responders to immune therapy). She has experience with the cellular and molecular aspects of HIV immune pathogenesis and immunotherapies, focused on HIV reservoir evaluation, immune-phenotyping, and also vaccine development/response assessment, and in vitro efficacy of HIV-CAR T cells. Most recently her research has focused on understanding the mechanisms of HIV reservoir maintenance and the absence of CD4 T cell recovery in HIV infected subjects that show different clinical outcomes . 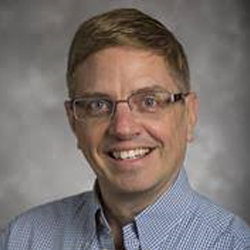 James Kohler, PhD
Associate Director, Next Generation Therapeutics SWG
Dr. Kohler (James) is an Assistant Professor Laboratory of Biochemical Pharmacology Division in the Department of Pediatrics at Emory. James has expertise in mucosal immunology, mouse transgenic models, pathogenesis (cardiac and renal) and toxicity models for HIV and antiviral therapies for human viral infections. His past training and research experience have included development and use of murine models to measure induction of mucosal immunity, signal transduction pathways associated in immune targets of HIV-1, tissue-specific antiretroviral toxicity, and HIV-1 cell-tropism and mutagenesis. James provides mentorship and co-leads the HIV Division of the Laboratory of Biochemical Pharmacology (Schinazi Lab). He previously served as Associate Director of the Emory CFAR HIV Cure SWG, now the HIV Cure Research Cluster.